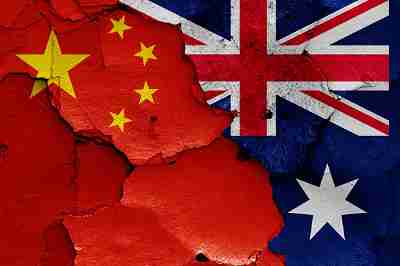 Here at BG Trading we are always trying to undertand all the facts that can affect our own portfolio and our members investments. Hence we believe this is a very important information as we currently holding some postion in stocks that are directly exposed to Australian’s exports.

It isn’t a secret that Chinese governement has been boycotting Australian’s exporters for few months already. According to AFR, Australian exporters are making long-term plans to diversify away from China after some shipments were cancelled this week as Beijing’s threat to ban more than $6 billion worth of commodities sent distributors in China scurrying to find new customers.

Apparently, two traders in Shanghai said on Friday they were told by Customs officials that their orders for Australian wine and other goods would not be cleared. They were not given any paperwork or a clear explanation for the ban or how long it would last.

Exporters in Australia were still waiting to find out late Friday if Beijing would implement its unofficial ban on wine, barley, sugar, timber, coal, copper and lobster nationwide. China is also expected to target Australian wheat exports, according to Australian farmers.

While many believed the move was a scare tactic, they said it had already had the desired effect as some exporters cancelled shipments while traders in China said they had no choice but to look at new markets because of the political risk. A notice outlining the banned commodities was circulated among the country’s distributors and confirmed by a state-controlled newspaper this week.

Industry leaders, furious at China’s attempts to play politics with billions of dollars in exports, said it was time to diversify away from the world’s second-largest economy.

“A lot of producers are starting to regard China as a bonus market now and not one they can rely on,” Western Australian Farmers’ Federation chief executive Trevor Whittington said.

“Banks are thinking the same way because right now it is not a reliable long-term market.”
Mr Whittington said farming and fishing businesses, mostly still family or privately owned, were starting to exclude China from earnings forecasts and business planning. Beijing’s bully boy trade tactics could backfire because there was a “made anywhere but China” mindset emerging among Australian farmers, he said.

Austrade briefed Australian exporters on the situation by telephone on Thursday while Australia’s ambassador to China, Graham Fletcher, addressed the Australian business community in Shanghai on Friday morning with a clear message that Canberra was not going to back down on its position on China.
Analysts said China would only ban products it did not need or would be able to obtain from other countries, including the United States which last year signed a trade deal with Beijing.

“Although it is hard to guess whether the ban will be strictly implemented, the Chinese government is taking concrete measures to reduce its imports from Australia,” Lin Guofa, a senior analyst with consulting firm Bric Agriculture Group, told AFR Weekend.
“All these Australian imports can be easily substituted by the same products from other countries.”

Melbourne-based research group IBISWorld said the bans would cause major damage to some of Australia’s most lucrative industries. It estimated Australia’s wheat exports to China were worth $568 million, timber $594 million, lobster $1.7 billion, copper $3 billion and coal $14.2 billion.

The Chinese government has denied it would implement such a wide-ranging ban, which would be in breach of World Trade Organisation (WTO) rules and its free-trade agreement with Australia.

A spokesman for China’s Foreign Ministry said the measures taken on foreign imports were in line with Chinese laws and the free trade agreement between Australia and China.
However, tabloid newspaper The Global Times, on Thursday referenced the possible sanctions in an article about an annual trade fair in Shanghai this week.

WHAT DO WE THINK ABOUT THIS FACTS
The increase of ban by China authorities on Australian’s exports combined to COVID-19, can definetly explain some drop of majors export player’s share price and perhaps further reflect negatively on the share price of many of these companies that export products or raw material to China. Highly dependable companies on Chinese markets such as as BHP, RIO, FMG, A2M, BUB, TWE as well as several others can still have its share price threaten if the tention between Australia and China escalates. It is important to keep eye on it and check on companies that are quickly looking other markets to diversify its operations. It is important to be constantly tracking this trading relationship between Australia and China as we believe that any signs of postive outcome can have immediately impact on these company’s share prices therefore representing a great entry opportunity in these stocks. We will be watching it!